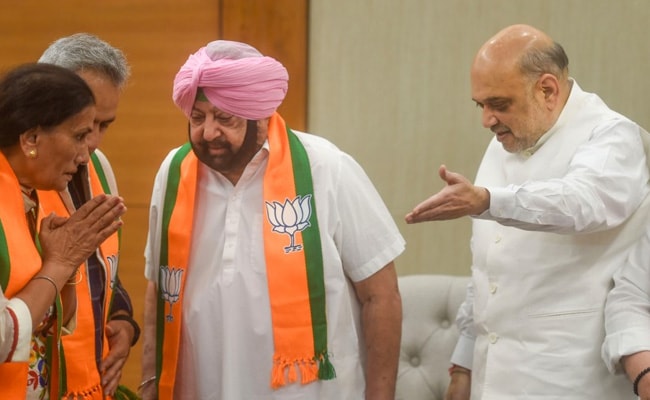 “It’s not necessary that wife will follow whatever her husband does,” 81-year-old Mr Singh shot back when asked if his wife is not joining the BJP.

Ms Kaur is presently a sitting Congress MP from Patiala. The Congress has not sought her resignation nor has she offered to resign.

“It suits both of them as congress knows if they ask her resignation the seat will go for by election and that would benefit AAP so both are silent,” a senior BJP leader told NDTV.

Congress party insiders claim that Mr Singh went ahead and joined the BJP as there are cases going against many of his family members.

“Once one joins BJP then all your sins are forgiven, so he too is trying to save his family,” said a senior Congress leader.

The former Congress Chief Minister floated his party Punjab Lok Congress last year and contested assembly elections along with BJP but could not win a single seat. In fact, he lost his own seat from Patiala to AAP.

This is not the first time that Mr Singh has merged his political party with another leading party.

This time, he merged his Punjab Lok Congress – born out of a bitter parting with the Congress – with the BJP.

“It is now time to join a party that is looking after the interests of the country,” said Mr Singh, right after he was welcomed into the party by Union Ministers Kiren Rijiju and Narendra Singh Tomar at the Delhi BJP headquarters.

Though earlier reports said that Home Minister Amit Shah would be inducting him.

Mr Singh also attacked the Congress from the BJP podium while addressing media. “Congress is responsible for condition of deteriorating security situation in the country. When congress was in power AK Antony was raksha mantri, he did not buy one single weapon and now that is being corrected under leadership of PM Narendra Modi,” he said.

In Amarinder Singh’s joining, the BJP now has a prominent Sikh face in Punjab who has been active in state politics for over five decades.

“BJP will be strong in Punjab because of the image of Captain Amarinder Singh as a nationalist secular Sikh leader. Hindu people also like him so how does strong support turn into a vote only time will tell but its effect will be in Punjab and it will strengthen the BJP,” union Law Minister Kiren Rijiju said while welcoming Mr Singh.