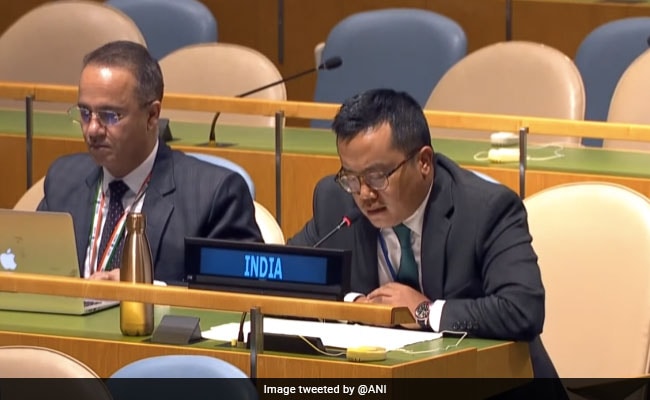 The government on Saturday slammed Pakistan Prime Minister Shehbaz Sharif for his anti-India tirade at the 77th session of the United Nations General Assembly (UNGA) a day earlier.

The first secretary of the Indian Mission to the United Nations, Mijito Vinito, termed Shehbaz Sharif’s claims over the Kashmir issue false and accused Islamabad of indulging in “cross-border terrorism”.

“It is regrettable that the Prime Minister of Pakistan has chosen the platform of this august assembly to make false accusations against India. He has done so to obfuscate misdeeds in his own country and to justify actions against India that the world considers unacceptable,” Mr Vinito said.

In an apparent reference to terrorist Dawood Ibrahim, he said the country that claims to seek peace with its neighbours, would never shelter conspirators of 1993 Mumbai bomb blasts.

“A polity that claims it seeks peace with its neighbours would never sponsor cross border terrorism. Nor would it shelter planners of the horrific Mumbai terrorist attack, disclosing their existence only under pressure from the international community,” Mr Vinito said.

Mr Vinito strongly reiterated India’s stand that it desires normal neighbourly relations with Pakistan in an environment free of terror, hostility and violence. India has maintained that Jammu and Kashmir “was, is and shall forever” remain an integral part of the country.

Referring to the recent incidents of forced abduction and marriages of girls from Hindu, Sikh and Christian families in Pakistan, Mr Vinito said it’s ironic that the country which has committed “grave violation of minority rights” is speaking about minorities on a global platform.

“The desire for peace, security and progress in the Indian subcontinent is real. It is also widely shared. And it can be realized. That will surely happen when cross-border terrorism ceases, when governments come clean with the international community and their own people, when minorities are not persecuted and, not least, when we recognize these realities before this Assembly,” he said.

On Friday, the Pakistan Prime Minister had said that Islamabad wants peace with all its neighbours, including India, but it is possible only after a “just and lasting solution to the Kashmir dispute.”

Mr Sharif claimed that India’s “illegal and unilateral” actions to change the special status of Jammu and Kashmir further undermined the prospects of peace and inflamed regional tensions.

“I think it’s high time that India understood this message loud and clear that both countries are armed to the teeth. War is not an option. It is not an option. Only peaceful dialogue can resolve these issues so that the world becomes more peaceful in time to come,” he added.