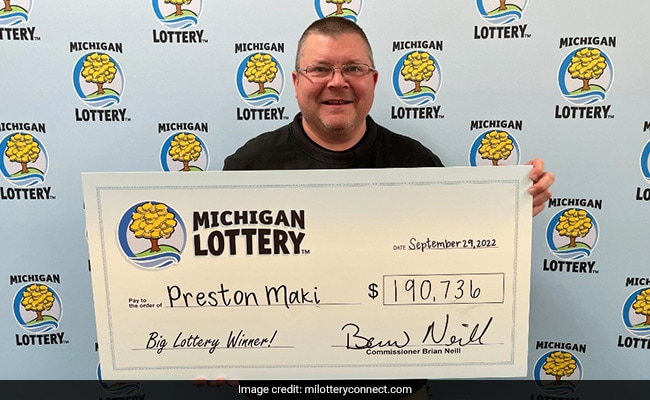 Mr Maki had bought a Fantasy 5 ticket from the Meijer store on his way home from work.

A Michigan resident in the US was wrapping up his daily office work when he got a message from his wife to bring some stuff from the grocery store. Preston Maki stopped at the store on his way back home, and this stop turned out to be a life-changing moment for him, as he won $190,736 in the lottery. Mr Maki purchased a Fantasy 5 ticket at the Meijer shop, and that ticket won him the jackpot. He matched all of the winning numbers that were drawn that evening: 05-12-16-17-29.

Preston Maki, 46, of Marquette, told Michigan Lottery officials he wouldn’t have bought his Fantasy 5 ticket from the Meijer store in Marquette if it hadn’t been for a message from his wife.

“I was finishing up my day at work when my wife sent me a text message asking me to make a stop for groceries on my way home,” Maki said. “I usually don’t play Fantasy 5 unless the jackpot is more than $200,000, but I saw it was close and decided to buy five easy picks.”

“The next morning, I was in the kitchen and scanned the ticket with the Lottery’s mobile app and saw I was the jackpot winner! Winning is so unimaginable!”

Mr. Maki stated that he intends to invest some of his earnings and to share some with his family.

A similar incident happened in 2018 when a woman went to buy cabbage, and she ended up winning a $2,25,000 lottery jackpot.

Vanessa Ward told Virginia Lottery that her father had asked her to pick up a head of cabbage, so she stopped by the Giant Food Store in Groveton. While she was there, she decided to buy a Win a Spin scratch-off ticket. When she went home and scratched the ticket, Vanessa discovered that she had won the game’s top prize: a live spin on the Big Wheel and the chance to win anywhere between $100,000 and $500,000. Vanessa’s lucky spin earned her a massive $2,25,000 prize.