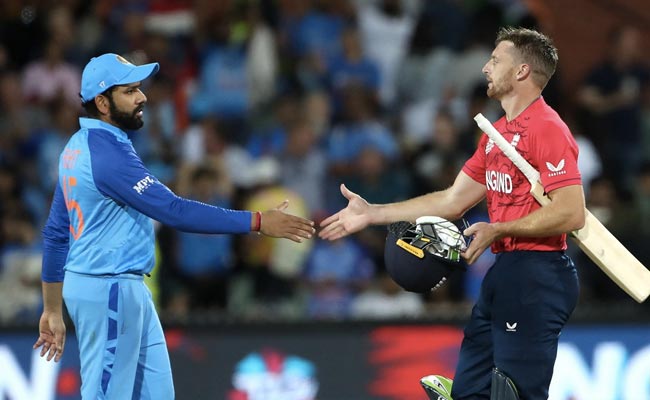 England prevented an India-Pakistan final by achieving the target in just 16 overs.

India’s hopes of winning the T20 World Cup came to an abrupt end today after a 10-wicket loss to England in the semifinal at Australia’s Adelaide Oval. Chasing 169, England openers Alex Hales and Jos Buttler raced to the target with four overs to spare. England will now face Pakistan in the final. Pakistan Prime Minister Shehbaz Sharif took a swipe at Team India after the Men in Blue’s humiliating loss.

In the 2021 World Cup, Pakistan’s opening pair of Babar Azam and Mohammad Rizwan had put together a 152-run stand to guide their side to a 10-wicket victory.

India, led by Rohit Sharma, had defeated arch-rivals Pakistan in the group stages of this year’s World Cup and fans were eagerly awaiting another encounter in the final. England prevented an India-Pakistan final by achieving the target in just 16 overs.

“If you lose the first six overs, both with the bat and ball, it becomes really difficult,” he added.

India won the inaugural T20 World Cup in 2007 but has failed to reach the final since 2014, and their qualification for the semi-final had raised hopes of finally repeating their early success.