In the past 55 years, only 40 women have made it to the Himachal Pradesh Assembly, and since 1967, the numbers never crossed 10% of the total strength of the House, official numbers analysed by CNN-News18 show.

In 1967, when women entered the poll battle in the state, with two women in the fray, none made it to the House, the Election Commission (EC) data shows. At least 206 women have contested the assembly polls in the state since 1967 and of these, just 40 made it to the house – around 20%. On the other hand, over 50% – 105 – have lost their deposits in the polls, the EC data shows. 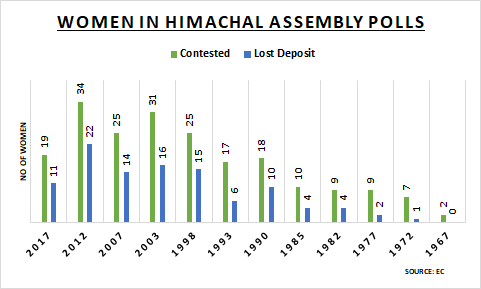 The 68-member assembly saw the highest number of women elected to the House in 1998, when six women won the polls, data from the EC shows. Barring 2007, when five women were elected, and 1998, the House has seen less than five women elected in each election. The state has not seen any women Chief Minister so far since its formation. The Himachal Assembly is going to polls on November 12 and counting will be done on December 8. This time, only 24 women are contesting the assembly election in the state, slightly up from the numbers in 2017.

Of the 24 women in the fray this time, six are from the Bharatiya Janata Party, while five are independents. The Congress has named three women in its lists. This time, the Aam Aadmi Party, which has fielded five females, is also in the fight.