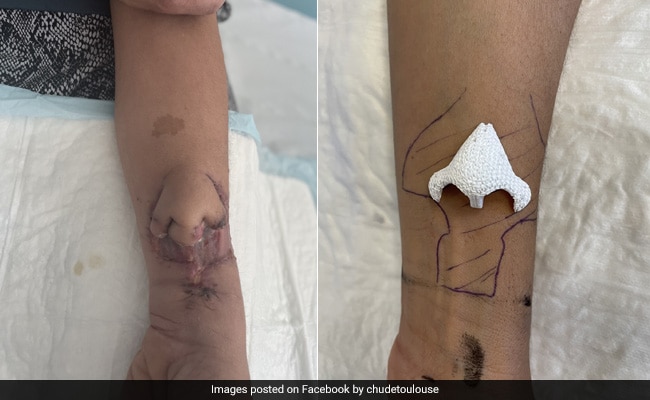 The woman lost a part of her nose after being treated for nasal cavity cancer in 2013.

Surgeons in France have successfully grown a nose on a woman’s arm and transplanted it on her face after she lost a large portion of her own during cancer treatment.

The woman from Toulouse lost a part of her nose after being treated for nasal cavity cancer with radiotherapy and chemotherapy in 2013. She spent years living without the organ, despite reconstruction attempts and prosthetics failures. But now, thanks to a ground-breaking medical procedure, she was able to get a new nose, that too the one she grew herself.

According to Evening Standard, a custom nose, made from 3D-printed biomaterial to replace cartilage, was made for her and then implanted on her forearm. The doctors then used a skin graft from her temple to cover the replacement nose. The appendage was allowed to grow for two months following which it was transplanted to her face.

Taking to Facebook, Toulouse University Hospital (CHU), shared pictures of the nose growing on the forearm. The hospital announced that the new nose was successfully grafted to the woman’s face on Tuesday.

“Today, the transplant is a success. After placement in the forearm and colonization of the medical device for two months, the device could be transplanted into the nasal region and successfully revascularized using micro-surgery by anastomoses of the blood vessels. She is doing very well and continues to be monitored,” the Facebook caption read when translated from French.

“After 10 days of hospitalisation and three weeks of antibiotics, the patient is doing very well,” the medics told the outlet, adding, “This type of reconstruction had never before been performed on such a fragile and poorly vascularised area and was made possible thanks to the collaboration of the medical teams with the company Cerhum, a Belgian manufacturer of medical devices specializing in bone reconstruction”.

Further, the hospital also stated that this new technique even makes it possible to overcome certain limitations presented by other techniques.