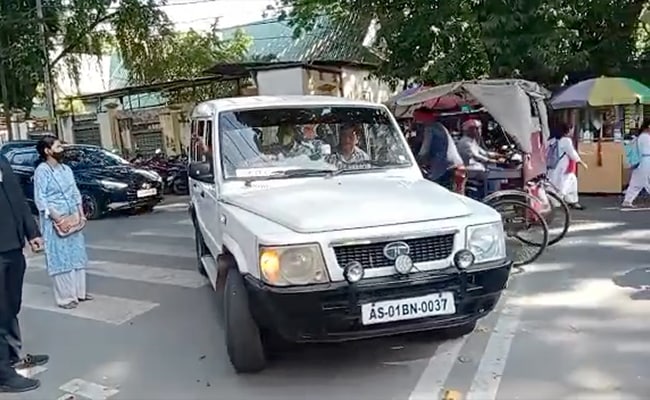 Himanta Sarma visited the family of the girl and assured fresh probe in the case.

A WhatsApp message from a local journalist to Assam Chief Minister Himanta Biswa Sarma led to an investigation into a case of the alleged suicide of a 13-year-old tribal girl who worked as a domestic help in Darrang district. The CID investigation was called to figure out whether there was a cover-up by the top police officials of the districts to turn a case of rape and murder of the minor girl to suicide allegedly after being bribed by the accused.

Assam CID has filed a chargesheet against the main accused Krishna Kamal Baruah, an SSB jawan in whose house the 13-year-old used to work as a help, for an attempt to rape and murder. The CID also registered a separate case of corruption by public servant and arrested a suspended superintendent of police and suspended the Officer in charge of Dhula police station. Three doctors, who did the autopsy and gave an allegedly false report denying rape and a magistrate who had allegedly given a false report have been suspended.

In June this year, the body of the 13-year-old was found inside Krishna Kamal Baruah’s house at Dhula. The local police and the accused claimed that the girl had committed suicide and her body was given a burial after an autopsy.

A statement issued by the Assam Police said Raj Mohan Ray was the SP of Darrang district when the case was registered. A fresh case was registered against him after it was established through analyses of bank accounts and other records that he received ₹2 lakh from the family of the accused through the officer-in-charge of the Dhula police station for “extending undue favors to screen the accused and dilute the case”.

The family members have also claimed that the girl was raped and then murdered.

“A local journalist from that area has texted me on WhatsApp with a lead on this case and the allegations of the family. I asked my office to ask for a status report of the case from the SP of Darrang  and on receipt of the status report I doubted that there is something fishy in this case as the accused was arrested only after I enquired, so I instructed the DGP that we need to reinvestigate the case and the case was handed over to the CID” Assam CM Himanta Biswa Sarma said.

Mr Sarma, along with Assam DGP Bhaskar Jyoti Mahanta had visited the house of the victim and assured a fresh investigation following which the SP, Additional SP, and officer in charge of Dhula police station were first suspended and now arrested by CID.

The CID did a thorough investigation which involved even exhumation of the dead body and a second post-mortem, forensic tests of the clothes, and DNA sample matching of the accused to the semen strains found in the clothes to find out that it was a case of attempted rape and murder. CID officials have added that the 13-year-old had threatened the accused that she would reveal to her parents and accused wife that she was sexually exploited, this is when the accused hit her with a plant object on the skull and neck and strangulated her to death and later hanged her body to stage a suicide.

“We formed an SIT led by an IGP and within six weeks we did the second post-mortem scientifically, formed a board of forensic experts to look at all forensic evidence, recreated the scene of the crime with a dummy of the same weight and height and we proved scientifically that she would not be in a position to hang herself with that height and then we used tower location, calls records and geo-tagging analytics to find out who all met and where money was exchanged as a bribe to cover up the case, now we have arrested all the key accused in the rape and murder as well as the cover-up case and have filed over 1000 pages charge sheet,” said ADGP (Assam CID)  A.Y.V Krishna said.

The Assam government has decided to reopen all cases of unnatural deaths involving domestic help over the past year.