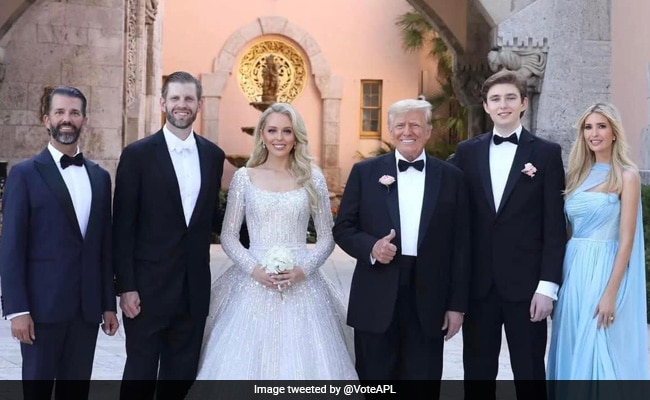 Tiffany Trump, the youngest daughter of former US President Donald Trump, officially married businessman Michael Boulos on Saturday in Florida. The couple tied the knot in a ceremony at Mar-a-Lago in Palm Beach, a property owned by her father. According to PageSix, Donald Trump escorted Ms Tiffany down the aisle and kissed her on the cheek before she exchanged vows with her now-husband.

US Congresswoman Anna Paulina Luna congratulated the couple and shared a picture on Twitter, in which the former President could be seen standing with his children – Tiffany Trump, Ivanka Trump, Donald Trump Jr., Barron Trump and Eric Trump.

Ms Tiffany wore a stunning long-sleeved dress by Elie Saab, with her hair styled in elegant waves. She completed the look with diamond earrings and a beautiful white veil which swept magically behind her. Mr Boulos, on the other hand, wore a classic black tuxedo.

Also Read | Elon Musk’s Mother Calls Him A “Genius”, Urges Critics To “Stop Being Mean to Him”

The bride exchanged vows with Mr Boulos in front of an altar covered in a halo of blue pink and white flowers. According to People, the venue of the wedding was chosen due to its significance to Ms Tiffany. “This was Tiffany’s childhood home and where she was brought into the world,” her mother Marla Maple told the outlet.

Ivanka Trump along with her husband Jared Kushner and kids, Melania Trump and half-brother Eric Trump were among the many guests who enjoyed the lavish wedding. Ms Ivanka wore a flowing blue dress. She even shared a few pictures from the wedding on her social media account.

As per PageSix, the wedding festivities went smoothly, however, the planning process was a bit worrying for Ms Tiffany. Just a few days ago, she was said to be “flipping out” and worried that Hurricane Nicole would ruin her big day. But fortunately, the couple reportedly got their marriage licence on Tuesday – hours before the Palm Beach County Courthouse was also forced to shut down for the week.

Also Read | In Latest Gaffe, Joe Biden Thanks Colombia Instead Of Cambodia For Hosting ASEAN Summit

Tiffany Trump is the former president’s fourth child and youngest daughter. She met Mr Boulos in 2018 while he was studying at the City University of London and she was on vacation in Europe. According to reports, Mr Boulos’ family owns a multibillion-dollar conglomerate of companies. The 25-year-old proposed to Ms Tiffany in the White House Rose Garden in January 2021.