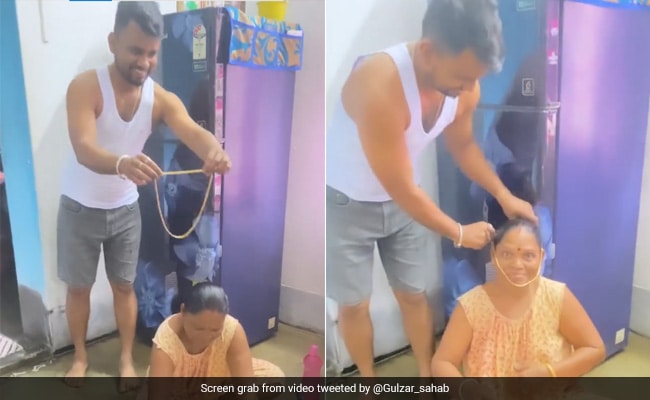 A heartwarming video of a man surprising his mother with a precious gift is gaining traction on social media. The 40-second-clip was shared on Twitter on Monday by a user named ‘Gulzar Sahab’. “Small Gift For Mommy,” read the caption of the post in Hindi.

In the video, the man is seen surprising his mother with a new gold chain. He is seen standing behind her while she is busy scooping out food for the family. Moments later, he is seen putting the gold chain around her neck.

Once the mother realised that she had been gifted a gold chain by her son, she is seen smiling wide in disbelief and handling the chain with care.

Watch the video below:

At the end of the clip, the mother is also seen getting visibly emotional at the grand gesture.

Since being shared, the video garnered more than 9,000 views and over 1,000 likes. Internet users were simply impressed with the man who bought his mother a gift for her love and care. They flooded the comment section with words of appreciation. While one user wrote, “Very nice,” another simply commented, “best”.

Meanwhile, speaking of surprises, earlier a video of a man surprising his mother and wife after bagging his dream job at Google had gone viral. UI/UX designer and writer Advin Roy Netto, who landed a job at Google as a Product Designer, shared on Instagram how he had been rejected by the tech giant several times since 2013, but kept trying.

He continued to work on his skills and resume till he was finally offered a job by Google. When he finally cleared the interview, he captured the reactions of his mother and wife, who were seen brimming with joy.

PM Modi, Xi Jinping Greet Each Other At G-20 Dinner, No Meeting Scheduled