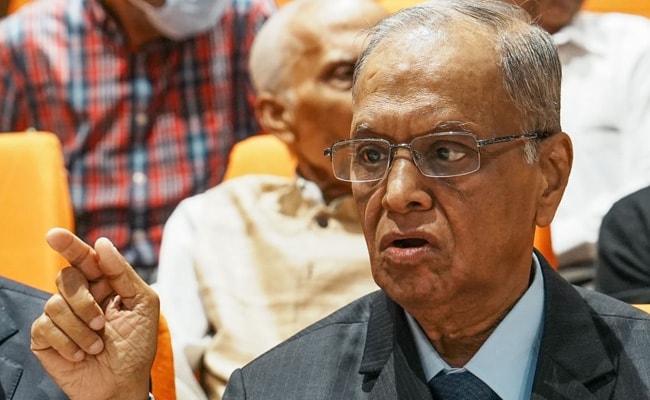 Infosys founder N R Narayana Murthy on Tuesday said the country faces huge challenges in the field of research in sciences despite the country achieving the feat of producing COVID-19 vaccine and inoculating the people of the country.

He underlined also the death of 66 children in Gambia in Africa due to India-produced cough syrup and that shamed the country.

He was speaking at an event to present Infosys prize to six luminaries by the Infosys Science Foundation. The prize carries a purse of USD 1,00,000.

Lauding companies which manufactured and supplied a billion COVID-19 vaccines, Mr Murthy said this was an achievement by any standard.

The IT czar appreciated the rollout of the new national education policy, which is based on the recommendations of professor Kasturirangan Committee.

The Infosys founder appreciated professor Gagandeep Kang and several others becoming fellows of the Royal Society in London, and professor Ashok Sen winning the Millenium prize.

“These are all encouraging and happy events that show that India is on a path of growth absolutely but we still have huge challenges,” the IT tycoon said.

“There is not a single Indian institution of higher learning in the top 250 of the world university global ranking that was announced in 2020. Even the vaccines we have produced, or either based on technology from advanced countries, or based on research from the developed world. Consequently, we still have not produced a vaccine for dengue and chikungunya, which have been ravaging us for the last 70 years now,” said Mr Murthy.

“That death of 66 children in Gambia, resulting from an India-produced cough syrup has brought unimaginable shame to our country and has dented the credibility of our pharmaceutical regulatory agency,” Mr Murthy said.

He, however, said there was a solution, which is a difficult one, and according to him, the country opted for it.

According to Mr Murthy, many experts feel that India’s inability to use research to solve immediate pressing problems is due to lack of inculcating curiosity at an early age, disconnect between pure and applied research, inadequate cutting-edge research infrastructure in the higher educational institutions, insufficient grants and inordinate delays in creating incentives for research and inadequate fora for knowledge sharing with global research institutions.

The Infosys founder opined that money is not the primary resource for success in invention or innovation.

Mr Murthy said there were two critical components for success in research — the first component is to re-orient teaching in schools and colleges towards Socratic questioning and relating what they learn in the classroom to the real world problems around them, rather than passing the examinations after learning by rote.

The second step is for researchers to focus on solving the immediate problems. Such a mindset would inevitably lead to solving bigger challenges, he opined.

The software industry icon said the IITs are becoming a victim of learning by rote, too.

“Even our IITs have become victims of this syndrome, thanks to the tyranny of coaching classes,” Murthy said.

He said nation’s progress on the economic and social front depends on the quality of scientific and technological research.

According to Murthy, research thrives in an environment of honour and respect for intellectuals, meritocracy and the support and approbation of such intellectuals from society.

“Therefore, recognising and rewarding the outstanding research efforts of researchers is necessary. By doing so, we will encourage not only other researchers, but also create role models and inspire young people to consider careers in research,” Murthy said ahead of announcing the researchers selected for the Infosys Prize-2022.

He told the gathering that the country has had a healthy run in scientific and technological progress in the last few years.