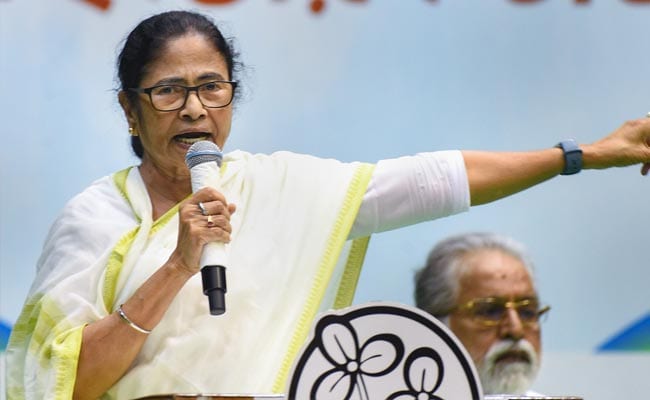 West Bengal Chief Minister Mamata Banerjee today hit out at the central government, claiming that Bengal’s dues on account of Goods and Services Tax (GST) and funds under various central schemes were being held back by the BJP-led government under Prime Minister Narendra Modi.

Attending a tribal outreach programme in Jhargram, the Bengal CM said: “The 100-day job guarantee scheme funds are mandatory. In spite of that, a year ago, I went and met the PM regarding this. Should I fall at your feet and beg?”

Taking a swipe at the BJP, Ms Banerjee said: “Are we living in a democracy? Or has India become a ‘one-party’ country?”

“Give us our dues. This is our money. Otherwise, scrap GST. You have to pay us our dues for 100-day job scheme or else leave your chair,” she said, while paying rich tributes to Birsa Munda, a freedom fighter from the tribal community.

The Prime Minister also paid tributes to Birsa Munda this morning on the occasion of Jan Jatiya Gaurav Divas 2022.

“They threaten to stop funds to Bengal. We can also stop GST,” the Chief Minister said. “You cannot collect taxes here and withhold our legitimate dues. You are denying the people of Bengal what is their due,” Ms Banerjee added in a sharp attack on the BJP-led government.

Yesterday, Ms Banerjee attacked BJP’s Suvendu Adhikari who had said that the centre would stop funds to Bengal under various schemes in view of corruption.

Hitting out at Adhikari, the Chief Minister said: “One day, such politicians will become zero, if they continue dissing Bengal. We are ranked among the top states when it comes to implementing these schemes, be it 100 days’ work or Grameen Sadak Yojana or Bangla Awas Yojana.”

While addressing the audience at the programme in Jhargram today, she urged the tribals to hit the streets and sit on a dharna if their rightful claims are denied and their dues withheld by the centre.